This is my first blog ever, not sure what I'm doing or whether it will work. Anyway here goes.

I read somewhere that any person with an average fitness and ability can undertake the infamous Lands End to John O’Groats cycle ride. That person was probably a nutter, who once did the ride, chaffed all the skin off his backside and undercarriage and just wanted others to feel the same level of pain. While I’m sure that it is indeed the case that anyone can undertake the ride, my concern is to complete it in one piece, with both body and mind in tact. From May 16th to May 29th 2009, my goal is to set out to establish whether it can indeed be done and completed, by a Mr Average.

Recent inspiration has been in the form of a very very large guy who recently completed the ride, I think he was 29 stone or similar and lost about six stone training and doing the ride. Blimey that’s over half of me. Rather than coming home, bigger, stronger and fitter, I might come back half the man that I was.

A bit about myself. I am currently 45 years old. I consider myself to be of at least average fitness (for my age) but I currently carry around a little too much lard around my midriff, and my man boobs need reducing or at least firming up. I did complete the London Marathon in 3:25 at the age of 43, so I know that I can commit to a heavy training regime. 2008 was a difficult year for me health wise. A routine operation didn’t turn out to be so routine, and I struggled to return to full health.

In a bid to get fit again, I began to think about challenges. I had never really contemplated doing the LEJOG before for various reasons, including not being too keen on cycling, it’s a very long way and it takes quite a long time. Did I say that it was a very long way? I cant recall exactly how the decision was made to do the ride, all I can say is that my wife was 100% behind me doing it and actively encouraged me. I do feel guilty about leaving my wife and three little ones for two whole weeks but my panniers are just not large enough to fit them all in.

Thinking about it, my cycling each day is the easy option. All I need to do is get up have breakfast then pedal, and do this for two weeks. My much better half has to stay at home looking after the three little ones, 8,6 and 4. Oh, and did I mention that she also has a full time job. She’s the real hero.

My original plan was to do the ride solo with no support, carrying everything I needed en route including tent etc. Shortly after committing myself to the ride I mentioned it to a friend, an ex Col of the armed forces. The next day he telephoned to ask if he could do the ride with me. And so, it is now the two of us. I’m a little wary of doing it with an ex army person, stiff upper lip sort. If his leg fell of en route I can imagine him saying, “Oh bother, never mind still got another leg, charge!”

Why May. Various reasons really. Firstly it give me time to get fit, the kids will still be at school, it should be getting warmer and the days will be starting to get longer, plus its out of season.
Posted by Pete King at 09:49 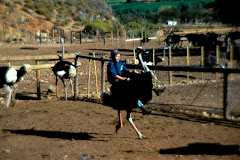